Android devices have taken over the market in the past few years to a tremendous height and the devices are gaining confidence of more and more consumers with passing time; hence, increasing the need for it to improve more. Android platform runs Applications that help users to commit various tasks whose accomplishment was only imagined, before the introduction of associated Applications. But, Android Apps have made it possible to make numerous things handy for use; thus, making the work easier. 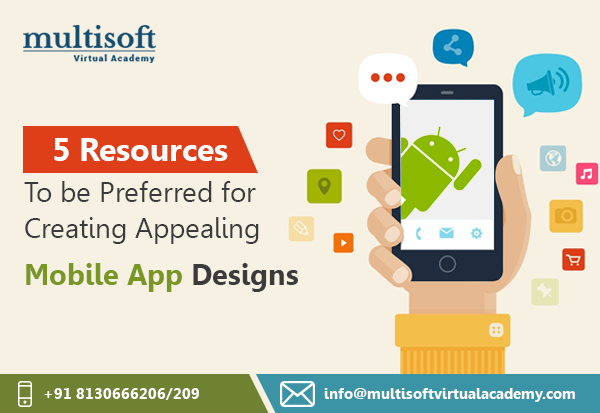 With an increase in Apps and their need, it has called for the requirement of App Developers who can develop distinct Apps for varied functionalities. Since, it is human nature to get attracted towards the more attractive environment; therefore, Android users also incline toward the Apps that have an interactive design and appearance.

Resources that should be chosen for amazing App designs

Let’s take an insight at the resources that can aid an Android Developer to create Applications with more appealing designs and make it stand out in featured list of Android Apps:

Look and feel of an App is counted as one of the prominent feature for the Apps when users consider them for use and focusing on this scenario the right manner is the job of an expert Android Developer.

The aspirants who wish to be proficient in developing the best-in class Apps can opt to learn more about Android App Development. There are several institutes that impart the knowledge about it and Multisoft Virtual Academy is one such renowned institute that provides Android App Development online training to the aspirants who have an inclination towards this field.

Getting acquainted with the deep knowledge imparted by Multisoft Virtual Academy expert trainers will let the candidates stand apart from the crowd and make their App top the charts in the App store.

Multisoft Virtual Academy understands the needs of customized curriculum and flexible schedules for the working professionals to take the training in sync with their job responsibilities. The learners can also testify their skills by attempting the set of 8 Assignments included as the part of online training; this will help them to identify their competencies amongst other peers.