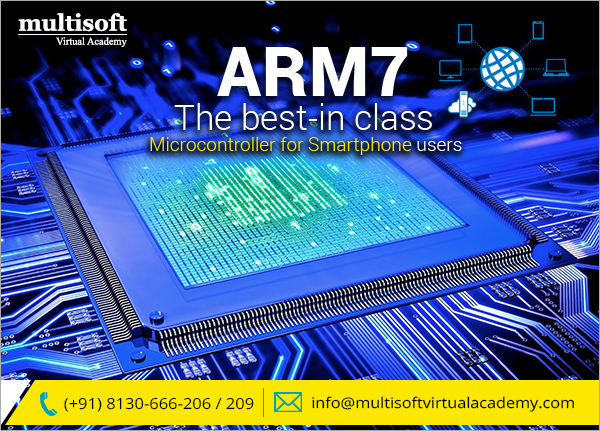 The increased use of smartphones and tablets has led the users reach the outer world more easily. The users who frequently use such devices must be aware of the term ARM, as it is the hardware used under these devices. It has a bit difference in usage when compared with laptops or desktops.

ARM is an acronym for Advanced RISC Machine wherein RISC is an acronym for Reduced Instruction Set computing. All the ARM processors are based on RISC designs. ARM is commonly known as an architecture which consider all its design as one family and keeps them updating with time under different and new version numbers.

The ARM microcontrollers is based on RISC Architecture that avails small implementations by using less power and increases the performance in return. There are many more key features of ARM that make it one of the most preferred ones in devices. Let’s get an insight into the features:

ARM7 is one of the types of microcontrollers that help the devices to work in an easier manner and this increases the confidence of users in a particular device. Many organizations use ARM7 in their devices to enhance the functionality and give the best-in class services.

ARM7 Microcontrollers have a bright future ahead and so does ARM7, as the usage of smartphones and such devices is moving on rapidly. The candidates who have the knowledge about in-out of ARM7 will get better opportunities in comparison to other peers. Opting for the ARM7 online training course can prove helpful for the ones who are willing to get a deep understanding of the concepts.

The online training program will help the candidates to test their skills by working on Assignments and Hands-on sessions. The experienced trainers also give Projects to the aspirants so that they can get acquainted with the required skills.