Blog » Ethical Hacking for IT Security

The wide use of internet has opened the doors of information to the modern society; at the same time it has exposed us to the hacking attacks as well. So the security mechanism should be tested time to time to check the resistance and robustness of the network. This is done by legally hacking the system and the person performing this is called Ethical Hacker. 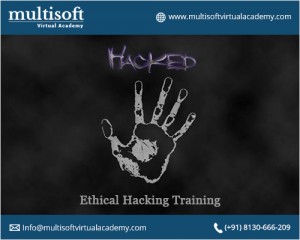 IT security involves various methods developed to protect the technology network against threats. But there is always a fear that attackers might break into an individual or company’s web server and steal the sensitive information. Thus, ethical hackers play a vital role in safeguarding a network’s security. Multisoft Virtual Academy provides Ethical Hacking Training to IT and security professionals who want to work as ethical hacker.

Ethical hackers normally follow the same pathway as that of an attacker. By this they come to know about the vulnerabilities present in the system. They then devise mechanisms and protocols to eradicate those weaknesses in order to protect the system against any malicious attack. In today’s times when everything is computerized, an attack can lead to cyber vandalism and loss of revenue. So ethical hackers are must for any organization. MVA’s Ethical Hacking Online Course imparts the necessary knowledge to become an ethical hacker.