The volume of data around the globe is increasing at a fast pace and is likely to increase even more with time. It has been found out that the data is increasing at a doubling rate every two years, currently. This has given rise to the term known as Big Data. 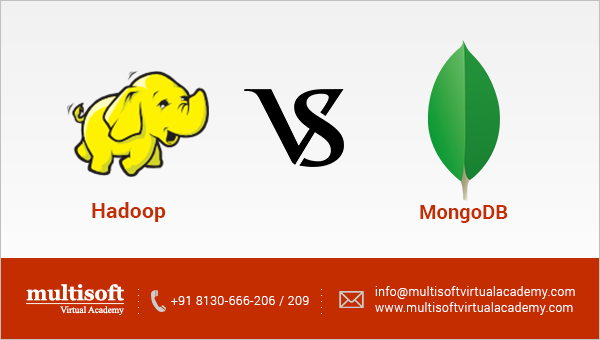 The explosion of data and managing the structured and unstructured data is one of the biggest concerns of the businesses. Hence, to make this task easier, the two primary software that aid organizations are Hadoop and MongoDB. These two have certain similarities, yet their way to process and store data has some differences. Let’s take a look at the aspects that make them look different.

Platform History of Hadoop and MongoDB

Let’s take an insight to the platform history of the two software:

Hadoop: It  was launched as an open source software. Hadoop has its root connected to the project named as Nutch and further, Hadoop got officially launched in 2007. It adopted the concepts from Nutch and became a widely chosen platform that made the organizations to process large volume of data. Hadoop is not meant to replace RDBMS; instead it works as a replacement of them.

MongoDB: It was launched in 2007 by the organization named as 10gen with an intention to run the software related services. However, it didn’t bring any fame to it and MongoDB was then launched as an open source software. This helped the software to garnish the needs of innumerable users and very soon it replaced the RDBMS systems.

Which one works well? Hadoop or MongoDB?

Hadoop: The primary components that make up Hadoop are namely MapReduce and Hadoop Distributed FIle System consists of some components, Pig to analyze large datasets, Hive to query data, and HBase. Hadoop consumes data in any format, even though it is integrated from different sources. HDFS takes account of data distribution and allocation of data in various columns.

MongoDB: It is a database management system and stores data in the form of collections. This helps in querying various data fields to be queried once, which allocates the data among multiple tables, located  one place. Deployment of MongoDB can be done on Windows or Linux systems; but, it is considered bet to be deployed on Linux for better work efficiency.

When it comes to dealing the data that is real-time based, MongoDB is the best choice and when it’s about working in the form of batches; Hadoop turns to be the best solution.