According to a report by the BBC, the latest version of the BABOK® by IIBA is going to release in mid-April. However, the exam based on the latest version won’t be immediately in effect. As per sources, it will come into effect at least six months after the release of a new version, i.e. BABOK® V3. Although, introduction of new version brings latest updates; it might not be of much benefit to the Business Analyst professionals preparing to take the CBAP exam based on BABOK® V2. Preparation for a CBAP certification is not an easy task, one needs to go through rigorous planning and training. 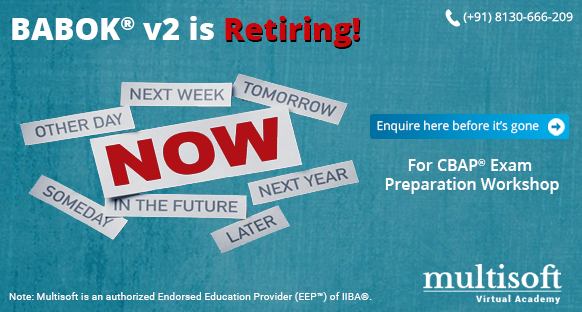 Hence, some of the disadvantages of BABOK® V3 from the perspective of a person, who is planning to undertake BABOK® V2 based CBAP exam, are:

However, you will be glad to know that the update of BABOK® versions from V2 to V3 only affects you if you delay taking the CBAP exam. Consider the scenario, where a person is having a vast experience as a Business Analyst (BA) and thinks of it a stable phase of the career. But, only experience does not help in climbing the growth ladder, in today’s world. If you wish to stand apart from the crowd and want to grow in a continuous manner, getting a CBAP title before your name is a primary requisite in the current competitive IT world. A certificate can serve as an evaluator and also speaks about your expertise as a Business Analyst.

So hurry before the time expires and enroll in a CBAP training as soon as possible. Complete the CBAP Training and become eligible for the exam. Don’t let your experience and preparation go in vain. Multisoft Virtual Academy offers CBAP Online Training & certification to experienced BAs who want to attain an in-depth knowledge about business processes. After this training, the candidates are qualified enough to design business strategies using various business tools.