From 2005 to 2016, BABOK has sailed years to emerge out as better-off information set for the Business Analysis practicing aspirants. One of the most used versions of BABOK has been V2 (Version 2), which is set to go through a transformation stage with the newer version, BABOK V3. Before getting stated with guide, it is essential to know the basic modifications the newer version of BABOK i.e. BABOK V3 has got from its predecessor. 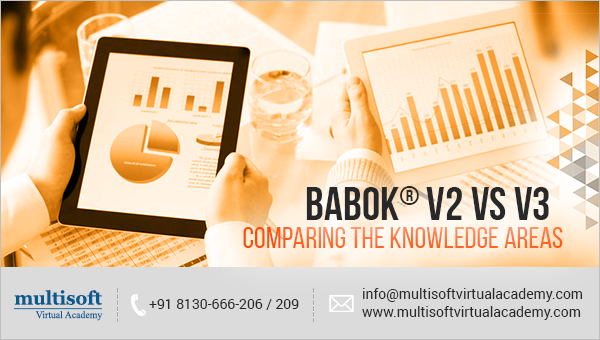 Here’s a comparison between the BABOK V2 and BABOK V3 on the basis of knowledge areas and tasks.

Focusing on the Knowledge areas, here is the comparison between the two versions in tabular form. Have a look at it.

Looking into the Knowledge area aspects of both the Versions, it can be concluded that the changes are not so dramatic. Though only one KA remains unchanged, the others are merely an alteration rather than significant changes.

In BABOK v3 comes with a deprecated total of 30 which means the older version had in total of 30 tasks. Talking about the task changes, roughly 21 tasks got modified in the BABOK V3. However, 11 tasks are still the same as V2 versions had. These 11 tasks are neither deleted nor added in the V3.

In short, BABOK version 3 is more organized and more efficient than its older version. The refined Knowledge areas and tasks are appropriate enough for the business analysis practicing.

Hope this works for you.

Want more information about BABOK V3? Stay connected and we will keep you updated with the same.

For any doubts, get in touch with us. We would love to help you.