IIBA® hit the headlines when it announced the launch of BABOK® 3 at Building Business Capability conference in Las Vegas. From the date of the announcement till April 15, 2015 when BABOK® V3 officially hit the shelves virtually, there have been a lot of speculations about the impending changes in the certification process.

Though the BABOK® V3 has been officially launched, there is still time for the CBAP aspirants to try their luck with BABOK® V2 in coming months. IIBA has not yet stated any dates for the revised certification program, but most likely it would not be before the last quarter of 2015. 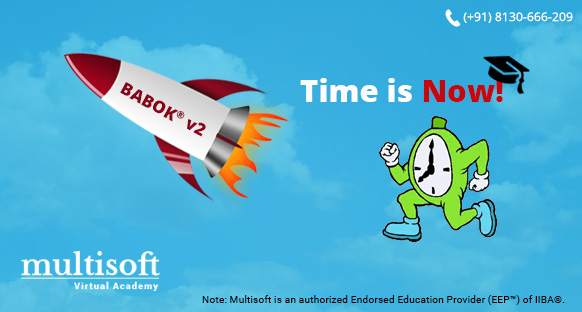 Here are a few reasons why CBAP aspirants should accelerate their preparations and stop postponing the application any further.

You might have bought few study guides, exam simulators and even have taken up the IIBA membership to avail that special discount for the certification. Are you willing to let go that sort of investment? Gear yourself and avoid the sunk cost by making sure you fill the application immediately without creating any further delay in your certification journey. Professionals can join CBAP Online Training to make their path easier.

BABOK is that one document which you can’t just go without if you are seeking CBAP. Going with BABOK 2 means you must have invested some quality time in developing an understanding about the current version. Though most of the understanding would be carried out to the next edition of the BABOK®, more analysis would be needed to grasp content and extensive research about the details to prepare.

Would the new version be tougher? How difficult questions are going to be asked in the examination? There has been a lot of clutter revolving around various permutations and combinations. But they are simply educated guesses. Historically, it has been seen that up-gradation leads to significant increase in the number of pages in the document along with other crucial changes in the document.

Multisoft Virtual Academy has supported millions of professionals in achieving their certification goals. The training pioneer is offering Online CBAP Training for aspirants to further their knowledge.