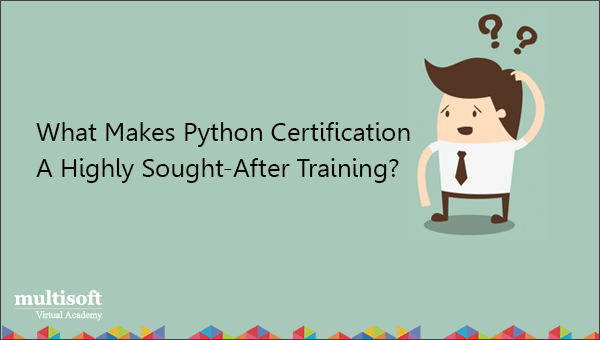 Python is considered an ideal programming language for beginners as it is relatively easy to learn in comparison to the traditional Javascript or C language. It is not only simple to learn, but it is also highly demanded in the tech world. Its common uses could be seen in making an RSS reader, creation of calendars in HTML, data mining, web development, application development, and much more. The benefits that flow from Python have made it a very popular coding language. In fact, the industry data show that in the year 2017, Python left behind the other widely-used programming languages such as Java, Javascript, C++, and Ruby, in popularity.

Today, tech-giants like Google, Yahoo, IBM, and Nokia, make use of Python, quite often. It means that the candidates with a sound academic background complemented with Python certification training may lend a job in these renowned companies. Some of the jobs that require the knowledge of Python language are that of a software engineer, back-end developer, data engineer, and full-stack developer, among others.

Python online training is a viable option for tech professionals to upskill themselves and grow in their career. It is also good for students from technical backgrounds who are pursuing full-time B.Tech or B.E. from a college or university. There is nothing better than getting the Python training online as it not only adds value to your profile, but also offers a high level of flexibility in terms of learning and time-management.

Multisoft Virtual Academy (MVA) is an online training organization that offers Python certification training, along with training & certification in various other courses such as Data Science, Machine Learning, Cloud Computing, and Digital Marketing, to name a few. MVA is a recognized training partner of reputable tech organizations like Microsoft, Oracle, Intel, Cisco, and Red Hat, among others. You may know more about MVA courses by visiting www.multisoftvirtualacademy.com.